Alexandr Novitskiy: "Each object has its own specific soul"

Alex has been sharing his stunning 3D renders and tutorials with our community for some time now, and we couldn't walk away from an opportunity to have a nice little chat with him. Turns out his works make the modeling job look so much easier than it really is - and he himself knows it can be a very bumpy ride at the start.

Read his captivating story about his learning process, best works and projects to help out all 3D designers out there. 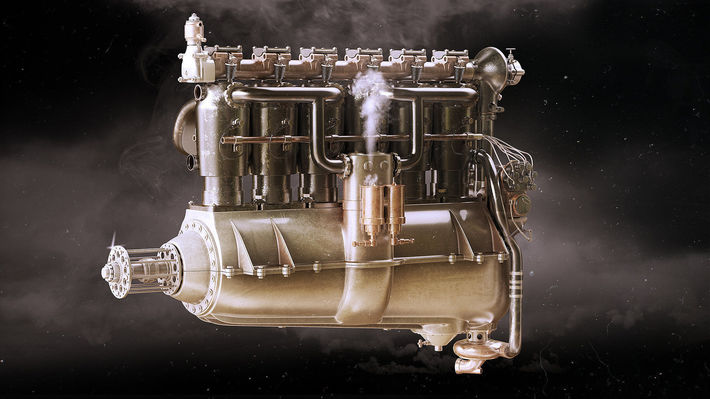 When and why did you start with 3D modeling?

It happened when I saw amazing masterpieces all over the web. Oh, no. It was much earlier! My first love was 3ds Max. I fell in love with its interface. It was capricious sometimes, like a girl, but we mostly got along. And yes, very soon I saw gorgeous CG images in the web. They were not the best, actually, but I liked them. Especially, cars. They were so shiny, so chrome, and I wanted to create my own.

Cars became my fetish for years after that. I wanted others to gaze at my renders as I looked at those cars. But here was a little problem: I did not have any models to render. I decided that I should do something similar. So I gathered all my ambition and tried to create a cool model with further rendering… and I screwed up. It’s OK, I thought, I just need to try again, everything will be fine. But I screwed up again. And again. Nothing was fine. It was a long period of trying to do something cool, but failing. I was frustrated. It lasted for more than a year, actually. In the end, I realized that I have to just do it. Because I want it. I left my ambitions and accepted that all I need is to learn and to believe that I will be able to create a masterpiece some day. I said to myself: “It must be my model, not a downloaded one. I should create one.” Without modeling skills, I could not go any further in my studies. “If I can’t create a cool model, I need to study”, I thought.

So I began to read different tutorials trying to achieve small “victories” with each one. I made my first steps only after I accepted that my skill level was nonexistent and I buried all my ambitions. It was really hard, you know! After several years with tutorials and freelancing, I went to “Realtime school” which is in Moscow. It gave me a great emotional charge. I began to create art for my own after that. I got something like ants in my pants. And yes, my art began to appear in the magazines and received awards on different websites.

Now I have a big collection of different magazines and books with my works. My little dream to create a cool image turned into a way of life. In 2013 I was invited into several online schools to share my modeling skills, so I became a modeling instructor in CGTarian in 2013. 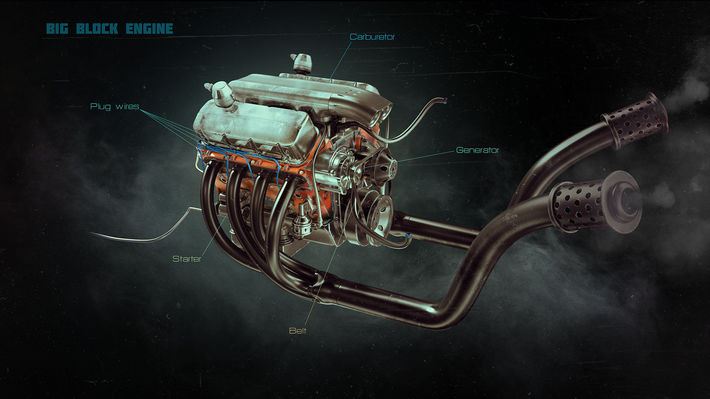 What objects/themes do you model the most?

Hard surface, I think. I enjoy working with vintage cars and sci-fi. I have made many models trying to recreate things like cars or old cannons. I like detailed engines and other complicated things as well.

What is the work of yours that you feel the most proud of or has some special value for you? Why?

I think, this one: Making of Another Sky

For two reasons: First, I love the theme of aviation and First Great Air War. It was a time when I was dreaming to make a model in this setting. Second, I like creating tutorials. I like it when a work is not only an image, but an image with a big and detailed explanation of its most interesting moments.

What software do you use in modeling?

Software is not a big deal for me. I believe that software is only a tool to work with. I use Maya and 3ds Max. I love both! However, I also use Zbrush for some specific tasks.

What resources do you use to help with your modeling?

YouTube, of course. It’s always on the first place. Polycount comes second, I found many ways to improve my workflow by browsing the forums. Many sites can be useful. When you’re searching for information, you will find it somewhere anyway. Or if you are just looking for inspiration – visit Artstation. 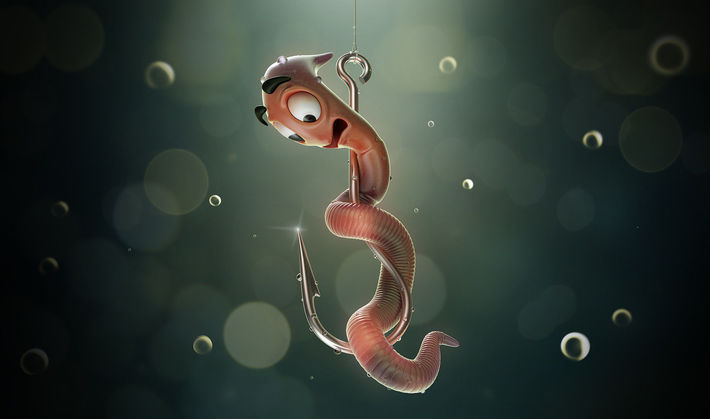 What are you going to work on next?

I am working on my biggest project now. It’s “Untitled One Academy”. It will be an online school for everyone who wants to start learning 3D graphics. All of the knowledge and experience I gained so far is going to be applied to my very new course called “3D Hard Surface modeling in Maya”. It is not finished yet, but it’s worth the wait. At first, school will be only in Russian language. English will be available later.

What is your ambition? Any specific dream project?

Actually, I am working on my dream project right now. I believe that I can make 3D graphics more affordable for everyone who wants to learn it, to be a part of it.

Do you have any future predictions for the CG scene?

First of all: thanks for this interesting question. I know that we live in a time of technological singularity. So all of the technologies are moving to the future very fast. Services like Kickstarter make our dreams and aspirations possible. CG scene, software, everything is going to change soon. Future for us is a time where we can be creative in the most important things. All the time. We will forget about all boring parts of our work. Yes, many people will lose their jobs, but it’s worth it. It’s the price we must to pay to achieve a more productive and creative society. I do believe in neural networks and in AI. And I’m not afraid that some robot will replace me. 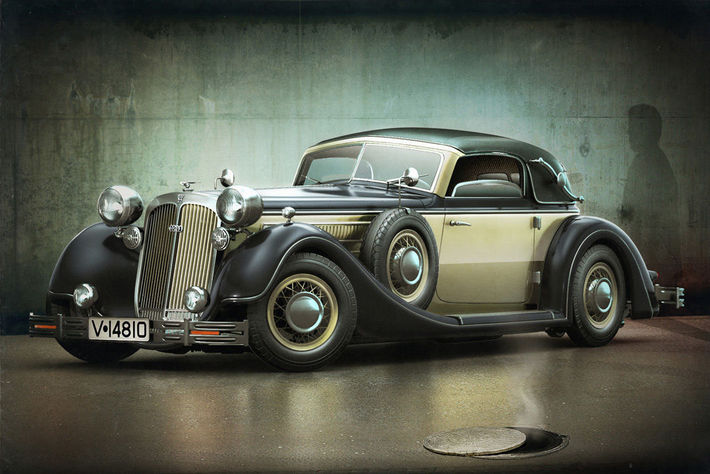 What drives your motivation to keep improving and learning? Any advice to your younger peers?

Envy drove me at first! That’s not a good advice for anybody, I know. I saw cool works and tried to achieve the same result. I failed many times and it frustrated me really hard. I realized that I am not worse than others and started trying to do my best every day. As a result, I began to feel pleasure from the process. My failures showed me what to learn next.

Let’s talk rendering. As an experienced 3D modeler, what are some of the things you always keep in mind about rendering when working on a model and a scene?

I think about shape first of all. I like clean and accurate models. I respect style and idea while rendering. I try to focus on my feelings about model. I always try to make clean and correct meshes for my models. It makes visualization more comfortable and accurate. A good model is only a part of cool render. The rest is lightning and shading.

Do you always plan for those ahead of time before you begin creating?

Of course. I try to catch a glimpse of the future image in my head. Each object has its own specific soul. I focus on my feelings on the future scene and try to imagine how it should look like. Imagination is a great thing. It’s a tool, by the way. A great, powerful tool. 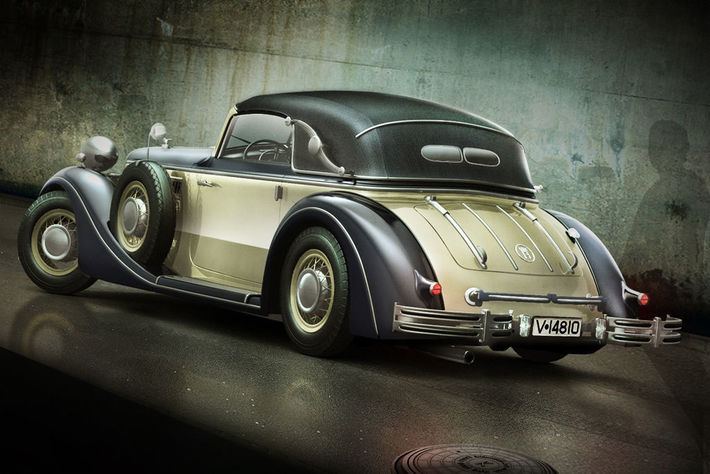 What were some of the mistakes you used to make in the beginning that now are rather obvious?

My main issue was with lighting. It’s the most important thing in rendering. I tried to copy different tutorials without understanding the subject. I followed the lessons very accurately, but every time my result was far away from from the one in the tutorial. I fixed this problem with different lighting tutorials later. I read many interesting articles on web, which explained how lighting works. The best school of lighting for me is the movies. You just watch a movie and learn how to light your model. The best way is to learn the basics, of course . It is important to understand where to look when you are studying feature films.

How does rendering overall and long render times affect your work and influence your workflow?

I’m not the one who renders everything in one pass. I’m a guy who likes to render high resolution images. I like to render everything in big resolution because it makes all of the mistakes visible. It’s a pleasure when your image looks great in 10K. It sounds a little bit weird, but I like to create tiny details which are visible only with zoom-in on high-res images or in the close up shots. Cool renders take time. I prefer to spend this time somewhere in the park or in the old Kiev. It makes me feel good and helps me to have a rest from the computer. All I need to do is to leave all devices like iPad and smartphone at home and go somewhere. Visit places. 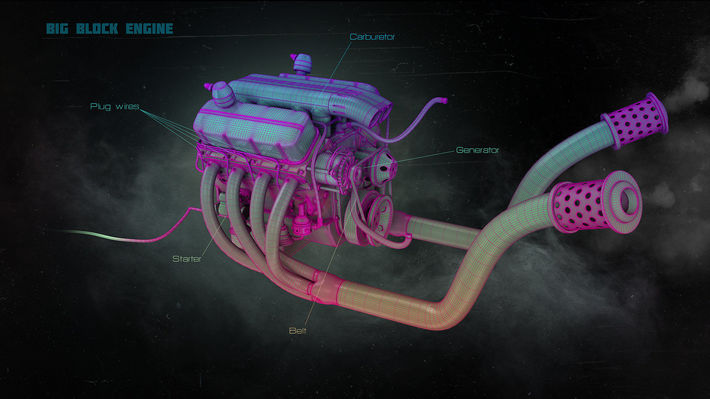 Can you share a few optimization tricks and common practices for shorter render times?

The key feature here is to make some adjustments on the post. If you can add some specular as a post effect – just do it! If you feel that this part of the scene is terrible, try to re-render environment separately from your model. Here you can do everything, just be creative! Usually I try to render different objects in different passes. It helps me to save time. If you can do some improvements on the post, do not hesitate.

Have you ever used a render farm? If yes, is there anything an artist should keep in mind when working on a scene that will be rendered on a network or an external render farm?

It was only once in my life. It was when I had a difficult scene and a weak PC. And a deadline, of course! I can’t even remember name of the service. But I recall that everything was done on time.

Tell us what you think!

wow u r the best

Thanks for sharing! Such dynamic lively renders

What do we write about?